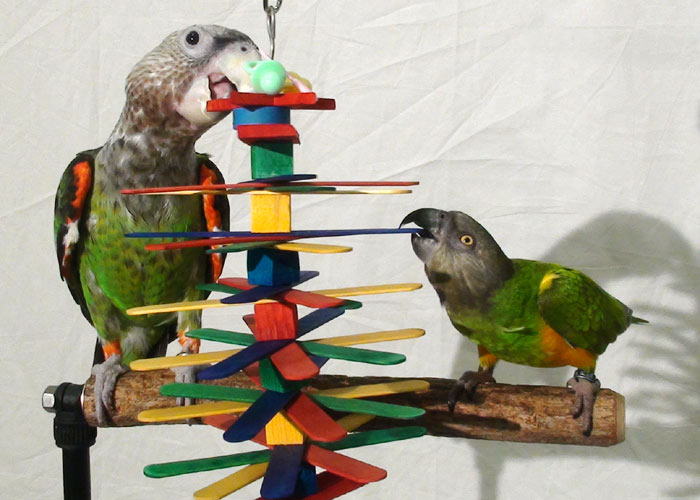 She knows somewhere in the region of 15 trained behaviours, including wave, flighted recall and even a spot of bowling! We're always working on new ones together and have a lot of fun training.

A few weeks ago, Northern Parrots posted about a world record for the most slam dunks by a Parrot in one minute (currently 23).

I knew immediately that this was a great challenge and definitely something that Scout was capable of achieving and possibly even bettering. Over the next few blog posts I’m going to document our training and how we get on with this challenge.

Before I tell you about our training for the basketball record attempt, I thought I’d start at the beginning and take you through how I taught her to  fetch, which started the journey towards the "slam dunk! ”

I’m hoping that it might give you a few ideas on how you could also train your Parrot to attempt the record in future!

How I taught Scout a basic fetch: -
Placed Scout on the back of a chair -
Grabbed a small food bowl, wooden ball (off a toy), a training clicker and a treat (for Scout, not for me!) - .
Held the bowl under Scout.
Handed her the fetching object (in this case the wooden ball).
Waited until she dropped the ball into the bowl, and the clicked the raining clicker and rewarded her with a small treat.

(An important note…if the ball drops away from the bowl, don't pick it up straight away, just stand for a moment with no interaction and then retrieve the ball. This is because I found that if I collected it too early, Scout appeared to be trying to teach me to fetch!)

I then repeated handing the ball to Scout and letting her drop it into the bowl. After a while she started doing it naturally with only a little prompting.

One or two 5-10 minute practise sessions a day was all that was needed, and after a few days Scout started to cotton on to what was expect of her. I began moving the bowl just enough to one side so that she would have to move slightly to make sure the ball went in the bowl. The first time I tried it she dropped the ball straight on the floor, but then she started leaning her head towards the bowl and letting it drop in with a satisfying THUNK!

It was an amazing feeling the first time I watched her shuffle over and do that, as she was clearly demonstrating to me that she understood what it was that I wanted her to do.

Now, she didn't just suddenly start doing this every time. Maybe 2 out of 5 times she'd move to get her ball in the bowl but slowly that started to increase, and as she got more confident, I challenged her more. I'd increase the distance she had to move, and over a few more sessions I had her consistently shimmying along the length of the chair top to the bowl before confidently plonking it in.

Nowadays she does this very easily and I don’t even have to reward her every time. As long as I use the training clicker to tell her she has done it right, she’s happy that if she continues performing that behaviour a few more times she’ll get a treat.

Adapting the trick to slam dunk!

I ordered the fabulous Birdie Basketball Net from Northern Parrots as soon as it was released.  I'd already been teaching Scout to fetch for about 2 months prior to getting the net, and by this point we were both ready for a new challenge. .

I needed to change the fetch behaviour slightly to make her place a ball into the net. I placed the bowl she normally fetches into, into the net, with the net set at a low height, and told her to fetch.

After I handed her the little wooden ball, she marched straight up to the bowl and ...THUNK, success!

I got her to repeat it a few times and soon realised that this was no problem for her - she happily accepted that this was the same behaviour she already knew well. The next logical step after this was to remove the bowl from the net to see if she would repeat the behaviour without it there.

Sure enough she threw the ball straight into the net. After that I just handed her a waffle ball and for the third time that night she impressed me.

In 10 minutes we'd adapted the simple fetch behaviour to a basketball slam dunk!

So there we have it, how I went from teaching her to fetch to having her slam dunk! I've actually managed to adapt the fetch behaviour to numerous different tasks – like putting rubbish in a small recycling bin, sorting colours on pegs, placing puzzle pieces in to slots and saving her money in a piggy bank. She can even do a flighted fetch to her basketball net now. .

All these tricks have stemmed from the same behaviour - I just had to adapt it slightly to suit each trick.

So why not give teaching fetch a go. It’s great fun for both you and your Parrot, and I'd love to hear if you have any success with it.  Next time, I’ll discuss our first attempt at trying to get Scout to slam dunk 23 times in one minute.