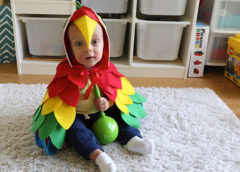 You know how there are certain things you really look forward once you become a parent? For me, one of those things was making my kids’ Halloween costumes, strangely enough. The thing is — I don’t sew. Or knit or crochet or anything else for that matter.  So when it comes to making costumes for my kiddos, it has to be dead easy. We’re talking dollar store felt and hot glue gun easy. And that’s exactly what this sweet little DIY parrot costume is.

Here’s what you’ll need to  make your little one an easy DIY parrot costume:

Alright, first things first, you’ll want to make sure your cape fits your little one well. If it’s a little too long or if the hood is a little too big, just trim along the edges. Perfection is not required here, as you’re going to cover the majority of the cape in felt feathers, so just keep the lines as straight as you can while working freehand.

With that out of the way, lay the cape out face down so you can get a rough idea of how many layers of felt feathers you’ll need in order to cover the body. Start with the bottom blue layer and lay out the felt pieces so they cover the bottom edge of the cape. Keeping in mind that the feathers will be approximately half of the width of a felt sheet in length, lay the green felt sheets above the blue ones. (Cutting the felt sheets in half lengthwise from the get go would work perfectly too, especially if you’ve purchased just what you’ll need for this project.) Repeat the process with the yellow and the red sheets, covering all the way up to where the hood connects to the body of the cape.

With your approximations in mind, it’s time to create a feather tracer. You’ll want it to be about half the width of your felt sheets high, but how you shape it is up to you. I went with a simple leaf-like shape and simply sketched it on my cardboard scrap and cut it out.

With that, it’s time to start tracing and cutting out your required feathers. This makes for a perfect in-front-of-the-television task, so turn on your favourite show and get to work! With some good TV on, you’ll have all the feathers you need before you know it.

When all of your feathers are cut out, fire up your glue gun and let it get nice and hot. Once it’s ready to go, place a small dab of glue at the top of a blue feather and press it onto the cape so that it covers both the side and bottom edge of the fabric. Continue adding blue feathers along the bottom of the cape, making sure to overlap them just enough so that the red doesn’t show through. When your blue row is complete, move up to the green row, once again overlapping the feathers in such a way that allows the cape to be fully covered. Continue this process until the body of the cape is fully covered.

Alright, time for the final bit: the parrot’s head! Admittedly, this part requires the most creativity, but I promise that it’s not much. The thing is, even if the head turned out horribly (which it won’t) there will be no question your little one is a parrot given all of the lovely coloured feathers on the cape, so not to worry. First up, add a few little feathers to the top of the parrots head by sandwiching a taller felt feather between two shorter ones and hot gluing them to the seam on the top of the hood.

Next up, you’ll want to cut out the two sort of fang shaped pieces for around the eyes. Trace the edge of the hood to get the one side of the shape, do a curved line along the top, and then close in the shape with another curved line. Once you have the first piece done, simply trace it and cut out another one for the other side and attach both with thin strips of hot glue.

Lastly, fold a piece of yellow felt in half. With the fold along the top, sketch a long thin beak shape that comes down into a point. Cut both layers of the folded felt out at once and hot glue the tip together for a 3D effect before gluing the other end of the beak just inside the front of the hood.

That’s it! You now have a homemade parrot costume that will be absolutely adorable on your little one!

Pair the cape with a brightly coloured shirt, some neutral bottoms, and your munchkin will be all ready for Halloween night. Bonus points if a sibling is dressed up as a pirate! 🙂