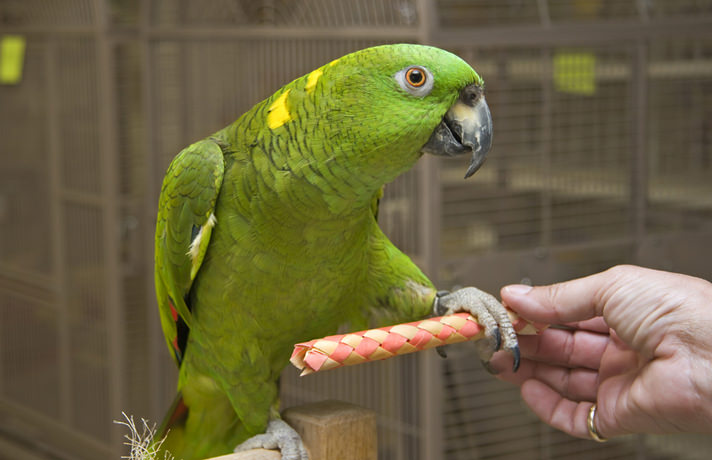 Playful and sweet, hand-fed Green-Cheeked Amazon parrots are good family pets that enjoy interacting with their human “flock.” While Green Cheeked Amazons are known as good-natured birds, they have a streak of curiosity that some owners say makes them more prone to mischief-making than some others of the Amazon.

Amazon parrots typically play hard. An Amazon parrot might swing upside down from the cage, delight in destroying their wooden toys and even wrestle their owner’s hand with their beak. An Amazon parrot’s mood is one of the easiest to read among parrot species because it is excellent at expressing itself through its body language: pinning eyes, raised head/neck feathers, fanned tail feathers and broad stance, for example, indicates a highly excitable Amazon parrot.

An Amazon owner should pay close attention to his or her Amazon parrot’s body language to be fully attuned to the bird’s mood. An excitable Amazon parrot might be telling you that it doesn’t wish to be handled, and failure to recognize this might result in a bite. An Amazon parrot can also go into “play overload” during play, especially when beak wrestling with you. Stop the play session to give your Amazon parrot time to calm down as soon as you see overly excited body language. Male Amazon parrots, especially male double-yellow-headed Amazons, yellow-naped Amazons and Blue-fronted Amazons are said to be more aggressive than females of their species.

Amazon parrots are one of the better talkers of the parrot world. They seem to be especially fond of music and singing. An Amazon could careless if the song it sings is off-key; it will sing as if it wrote the sing itself. Amazons can learn to speak a many words and phrases and imitate sounds. An Amazon parrot can also be noisy, especially when it wants attention. It can scream loudly and some make a repetitive honk-like sound when they want something. Some Amazons make a little shrill sound to express delight while they eat a favorite treat.

Amazon parrots are prone to becoming obese, which is why owners should pay attention to the amount and types of food offered daily. Other diseases/conditions that affect Amazon parrots include: Polyomavirus (can cause anorexia, lethargy, weight loss, death); Chlamydiosis (signs include low appetite, fluffed feathers, nasal discharge) and vitamin-A deficiency if fed an inadequate diet.